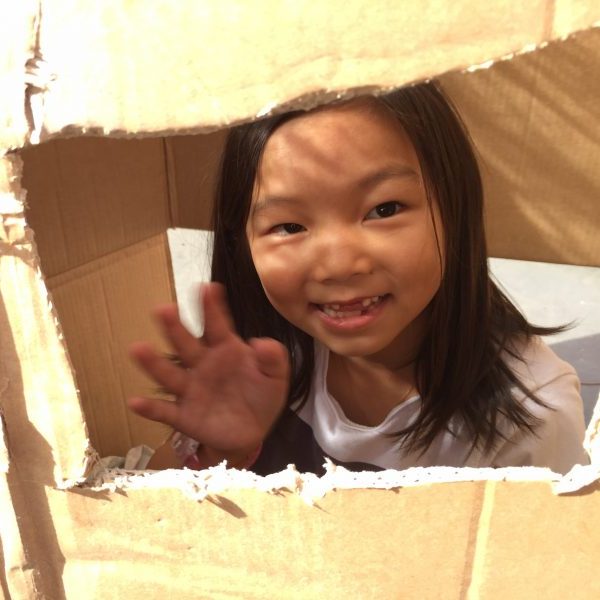 At reDiscover, we use a lot of cardboard. From playgrounds built of appliance boxes to eight foot ball run tubes to cardboard bonsai to prototype lunch boxes in a Design Thinking project, its cardboard, cardboard, cardboard. Paperboard from cereal boxes. Double and triple ply shipping boxes strong enough to stand on. Paper towel rolls, carpet rolls, and even the occasional coveted matte white undecorated sheet.

Cardboard is cheap, plentiful, light, strong, easy to manipulate, and recyclable. With hand tools like Canary Cutters and pliers-grip staplers, kids can manipulate this material to make structures larger than themselves, costumes, models. Teachers don’t need specialized maker education training to get started. You can bend, fold, spindle, and mutilate it into just about any shape. Make something in cardboard and you can quickly communicate with your brainstorming team, in 3D no less, or shape and sand it over time into a beautifully finished art object.

It starts with cardboard play. We give a group of inquisitive makers, preschool on up to adults, a stack of boxes. Everything from shoe boxes to refrigerator boxes. With the least prompting, kids jump into cooperative, creative, dramatic, and construction play. With preschool and early elementary, we see a range of play modes. Some want to build. Some want to explore. Some just want to move. They’ll set up a single box and jump in and out of it, or find a tunnel formed by some other kids and crawl through over and over. Others grab a piece and it becomes a shield, a wand, a surfboard, or all at once. One might try to move a large tube and need to recruit two more to muscle it into place. There’s an exhilaration to being able to move something larger than yourself, to having objects to play with that can be moved, changed, made their own.

With older kids, upper elementary, we’ll let them play for a while. There’s less movement, more making. We watch them exploring the possibilities, trying new things, testing their skills at moving and working together in this medium. Then we introduce tools and techniques to enhance their abilities to cut, form, and combine cardboard into new shapes and structures. How to safely and quickly cut. How to make a hinged connection, or a reinforced one. How to read a given piece of cardboard, its strength, the orientation of its corrugation, its ease of cutting or bending, its beauty. Our approach here is not to give a lesson on technique to a class, with everyone cutting Template A and slotting into Template B, but to spot where someone is stuck, or could be more effective, then teach them what they need, exactly when they are most motivated to absorb it. This works well in classrooms, and even better at recess, after school, and at community festivals.

Starting in upper elementary and particularly with our middle school students, cardboard becomes a medium for prototyping, a way to test ideas in models and refine a design. Sometimes the cardboard prototype is so solidly built it becomes the final product itself, solving the design problem in all its particulars. More often, cut, trimmed, folded, slotted, taped, and formed cardboard prototypes serve as a corrective to rushed thinking at the sketching stage. A cardboard prototype identifies new problems to solve in a design. It allows a student to communicate their ideas to their team or teacher. Middle schoolers grasp the fundamental techniques of cardboard construction quickly and start getting into measurement, consistency, and 3D reasoning, applying and reinforcing their understanding of shapes, nets, and solids. It can be applied across the curriculum, whether making a model of plate tectonics, a cosplay version of Athena, or a diorama of a Tongva village. The ease of manipulating cardboard into self-supporting 3D structures, on the intuitive scale of palm sized to room sized objects, makes cardboard a key part of any maker or project based learning program.